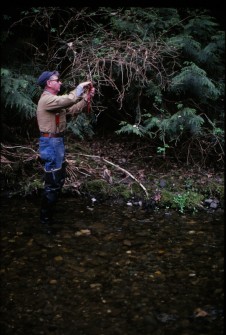 North Olympic Land Trust is honored to be part of recognizing exceptional contributions of the late Dick Goin (1931-2015) through its third annual “Out Standing in the Field” award at its March 18, 2016, Conservation Breakfast.

Dick Goin’s field for more than 100 days each year was mostly water, waters of the North Olympic Peninsula – from the mighty Elwha River to smaller streams like Siebert Creek, Ennis Creek and dozens of others.

But throughout his 42 years as a Rayonier millworker and after retiring in 1991, Dick devoted time to caring for the “fields” – lands that are part of the ecosystem essential for healthy freshwater and saltwater habitats.

Dick Goin already was highly regarded for his conservation activities when he helped the Land Trust grow so that by 2016 it had protected more than 3,200 acres of lands important for fish habitat as well as forests and farmlands. Many of those acres are alongside streams where Dick fished, studied and contributed to habitat improvements. He has been called “a master among master fishermen.” But as he became increasingly concerned about dwindling fish populations, he usually left his fishing gear at home and just headed out with a notebook to record data.

Dick’s contributions continue in many ways. Scientists use the data he carefully collected. He was known for his phone calls and visits to offices of biologists and fisheries specialists and homes of volunteers, excitedly passing along whatever he’d just learned or had been thinking about. His passion inspired others with the result of more action toward improving fish habitat – from the mighty Elwha to much smaller streams on the North Olympic Peninsula.

He did much more than collect data and make proposals. At the Rayonier Mill, where he worked for more than 40 years, he’d long watched salmon returning to Ennis Creek during work breaks. As he saw fewer fish, he did everything he could to bring them back – from shoveling gravel and sawing up logs clogging fish passage for Highway 101 to taking out a long unneeded wooden dam higher up Ennis Creek, close to its source in the National Park.

He became so respected that when he spoke, people listened – whether he was a featured speaker at a conference, part of a committee or walking along a stream with a fortunate companion.

Dick has been featured in newspapers and other publications here, in Seattle and even in Colorado. He appears in Voices of the Strait and Return of the River and The Memory of Fish, which is due for release in 2016.

Comments and photos of Dick and his family appear in An Interpretive History of the Elwha River Valley and the Legacy of Hydropower on Washington’s Olympic Peninsula. Most of a chapter in a doctoral dissertation, Elwha: Value of a River, is devoted to Dick’s history and comments. He was a keynote speaker at the Elwha River Science Symposium in September 2011, a few days before dam removal on the Elwha River began.

Numerous organizations have honored his work. He and Marie, his wife for 64 years, received Clallam County Community Service awards in 2007 for their work with Volunteer Hospice as well as habitat restoration. They also received the Eleanor Stopps Environmental Leadership Award from the Port Townsend Marine Science Center in 2011.

Lower Elwha Klallam Tribe chairman, Frances Charles, called him “an elder to us” and “an individual with a good heart.”

Dick often spoke of how important wild fish and game were to his family when they moved to the area in the depths of The Great Depression.

They also were important to Dick and Marie, high school sweethearts who married at age 19, especially during the years of supporting their four children.

Marie said she knew before they married that Dick would spend a great deal of time out fishing and hunting. Their first date was going fishing. After their children were older, she accompanied him when she could as he fished and studied streams. “I just followed Dick around while he did his thing,” she said.

To learn more about the exceptional and generous legacy of Dick Goin, you can click on these links:

Film trailer: The Memory of Fish

Video: Voices of the Strait

Book: An Interpretive History of the Elwha River Valley and the Legacy of Hydropower on Washington’s Olympic Peninsula