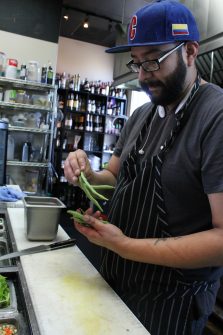 “There are very few real things in this world and food is one of them,” Carlos Osorio said.

Osorio is the Executive Chef of Blondie’s Plate in Sequim, and is assisting John Pabst, chef and owner of Pacific Pantry to prepare the multi-course meal for the Land Trust’s 2016 Harvest Dinner. Both chefs fell in love with food and cooking at a young age.

Osorio discovered his interest in cooking as a child, alongside his friends while growing up in New York City.

“At like 12- or 13-years-old we would throw our own barbeques on the street,” he said. “I think what I learned from that is I can make people happy and have friends through cooking.”

A high school program furthered Osorio’s interest in cooking, and eventually led him to attend The Culinary Institute of America in New York.

Like Osorio, Pabst attended The Culinary Institute of America, but developed his love for cooking from both his stepmother and father. Pabst would often help his stepmother bake for local coffee shops, and connecting him to his German roots, he learned to make homemade sausage from his father.

“When I was growing up and trying to decide what I wanted to do, I knew that I loved science and I loved food,” he said. “I started cooking for 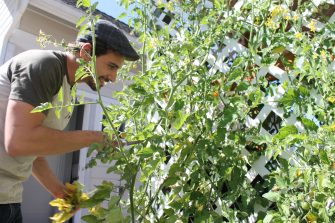 restaurants while in high school and figured out that you can apply science in food. Food is science and there’s a reason things work.”

“I also love that food makes people happy,” he added.

Despite being alumni from the same culinary school, the two chefs didn’t meet until they both lived in Sequim and happened to be at the Port Angeles Farmers Market. Upon meeting, Osorio and Pabst were quick to recognize their shared connection to cooking. Osorio and Pabst have grown to be friends and often collaborate on culinary ventures, such as catering the Land Trust’s 17th annual Friends of the Fields Harvest Dinner.

Pabst echoes Osorio’s excitement for a chance to reconnect people with the land.

“In supermarkets there’s a huge disconnect between the consumer and the farm, and not many people know where their food comes from anymore,” he said.

Together, Osorio and Pabst have been crafting a multi-course menu to reflect the bounty of local farms – one of the primary reasons Pabst decided to open his artisan deli in Sequim. 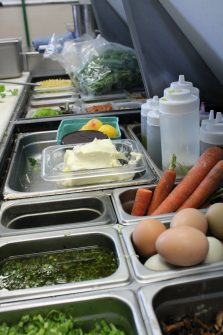 “I stopped here and opened up here because there were local farms,” he said.

Kicking off Harvest Dinner Pabst and Osorio are starting with a charcuterie course to act as a “snapshot” of local food, Osorio said.

“Among others, it will highlight local pork, breads made from local grains … we’re going to make sauerkraut from local cabbages, tomato jam from local tomatoes and mustard from local mustard seed,” they said. “We started from there and I think the menu has evolved based on discussions about what’s available and in season.”

Because it’s a harvest dinner Pabst and Osorio have developed a vegetable-driven menu, while including a couple of meat courses.

Through culinary, community experiences like Harvest Dinner, Pabst and Osorio hope to encourage people to look beyond the food to the farms, farmers and the cultural importance of sharing a meal.

“In most other countries food isn’t just what you put in your body to sustain life, but it’s a part of their cultural fabric,” Pabst said. “In this country, that’s not the case so much, as it’s more about work, business, the dollar and after WWII the country went in the way of producing food very quickly, but I think it’s beginning to move in another direction – I hope so.”