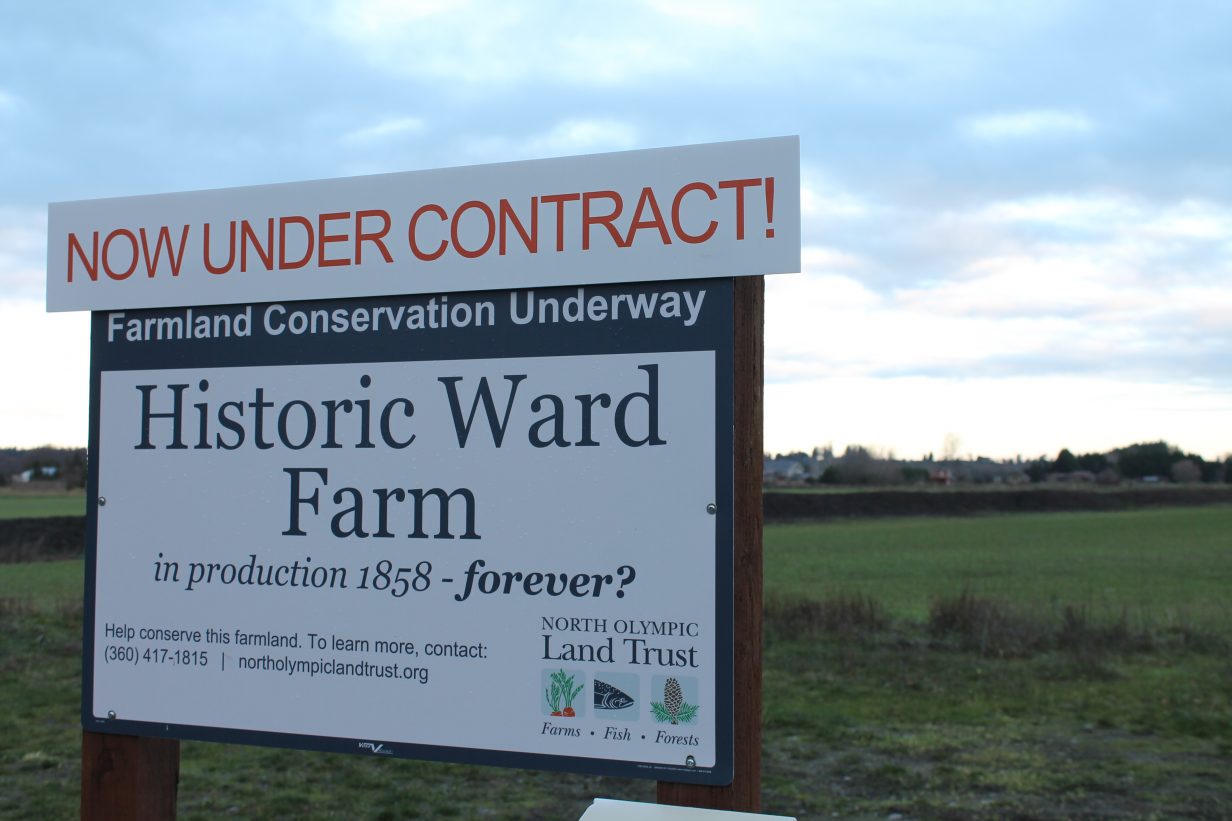 Sixty acres of active farmland within the Sequim-Dungeness Valley is now set to forever remain available for agriculture.

Following more than five years of working with the property’s stakeholders, receiving state funding in 2015 and the completion of a recent community farmland campaign, the Historic Ward Farm is officially under contract with North Olympic Land Trust for conservation.

In late November, stakeholders signed an agreement with the community-supported nonprofit to place a conservation easement on the land, which has been farmed since 1858.

“It is great to see our community continuing to make progress in the ongoing work to preserve the vestiges of local farmland,” said Tom Sanford, North Olympic Land Trust executive director.

“This farm is just one piece of the puzzle, but it is representative of the amazing work our community can do to protect its natural resources, including farmland.”

Located at the corner of Woodcock and Ward roads, the farm is one of few large sections of farmland that remain along the lower Dungeness River.

Within its 158 years, a variety of crops have been grown on the farm, but for the past 12 years, Nash Huber — the owner of Nash’s Organic Produce — has grown an array of seed and row crops.

“This land [Historic Ward Farm] is one of these keystone pieces of property,” Huber said.

“It is situated in the middle of the valley, it’s right next to the river and has really fine soil that we’ve worked with for over 10 years to improve the fertility … you really can’t beat the nature of the soil that’s here.”

Beyond its nutrient-rich soils, the Historic Ward Farm is valuable to Huber with its existing infrastructure, including farm equipment storage and, most important, two wells.

During the 2015 drought, Huber relied heavily on the farm’s dependable water supply to grow half his vegetable production.

Among the approximately 700 acres that Huber farms, seven of the properties are conserved, he said. Knowing the majority of the land Huber farms isn’t at risk of changing uses gives him the security he needs to invest in aspiring farmers.

“These conserved lands are the only reason I can offer the next generation of farmers a career,” he said.

For Huber, the conservation of farmland is an obvious need, but he realizes for many people, it might not be.

“We seem to think that our food supply is global, and a lot of it is,” he said.

“Over half of it comes from out of the country, but that’s a fairly new phenomenon and I think that’s going to change with climate change and population growth. I think we have to be serious about considering where we’re going to get the food we eat and what our area and environment is going to look like.”

Now under contract, it’s anticipated within the next couple months the Historic Ward Farm will join the 460 acres of local farmland conserved thus far.