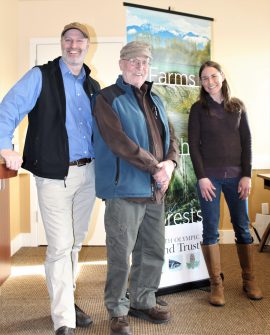 Sixty acres of long-farmed, fertile ground within the Sequim-Dungeness Valley is no longer at risk of being anything but a space for local agriculture. Steve Vause, landowner and president of the 159-year-old Historic Ward Farm’s group of stakeholders, signed the final document needed to confirm a conservation partnership with North Olympic Land Trust on Thursday, Feb. 2. Although the farm came under contract for conservation in late November, the successful effort by Land Trust officials to conserve the farm, which is among the few large swaths of farmland remaining in Clallam County, was a multi-year process that relied on both state and community support.
Click here to learn more about the 2016 Friends of the Fields community campaign.

“The importance of local farmland is something we (farm’s stakeholders) all share,” Vause said. “It’s exciting to know this historic farm will always be available for agriculture.”

Nash Huber of Nash’s Organic Produce* has farmed the Historic Ward Farm since 2004, and thanks to the community for conserving it, the Historic Ward Farm will continue to provide a variety of row and seed crops. Nash’s products are available at markets across the Olympic Peninsula, local farmers markets, as well as the U-District, Ballard, Capitol Hill, and Pike Place at the Courthouse in Seattle, plus other markets on the west coast. The farm also offers a CSA (community supported agriculture) program to residents of the Peninsula and Seattle areas.

Including the newly conserved farm, 520 acres of local farmland are conserved through North Olympic Land Trust with an additional 132 acres in the hopper.

* Click here to learn about some of the health benefits of going organic from Helen Sanders, chief editor at Health Ambition.