North Olympic Land Trust is expanding its team, and I’m lucky enough to be a part of that growth. 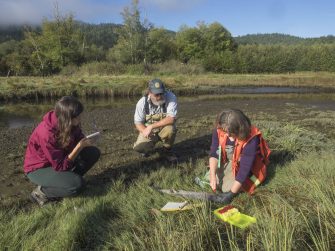 Alana Linderoth takes notes near the mouth of Jimmycomelately Creek while reporting on the summer Chum Salmon returns.

My name is Alana Linderoth, and having lived in the Pacific Northwest – mostly the North Olympic Peninsula – I’m honored to have the opportunity to work with an organization I’ve long respected.

I was born in Port Townsend, but grew-up in Sequim. My childhood was spent exploring my surroundings, including the beaches, mountains, rivers, meadows and forests of the North Olympic Peninsula. My close connection to the land developed through interaction – from horseback riding, backpacking and fishing to simply enjoying a quite moment in nature.

As I grew, so did my love for the peninsula and its communities. I later took that passion and my interests in writing, natural history and science to Huxley College of the Environment at Western Washington University and studied Environmental Journalism. Since graduating in 2011, I’ve written for a variety of publications, including both newspaper and magazines. Prior to pursuing my new role with North Olympic Land Trust, I had been a reporter for the Sequim Gazette.

Moving forward as the Land Trust’s Community Engagement Specialist, I aim to use my skills and deeply rooted love, appreciation and respect for the North Olympic Peninsula to foster the conservation of farms, fish and forests – all lands that sustain the communities of Clallam County.