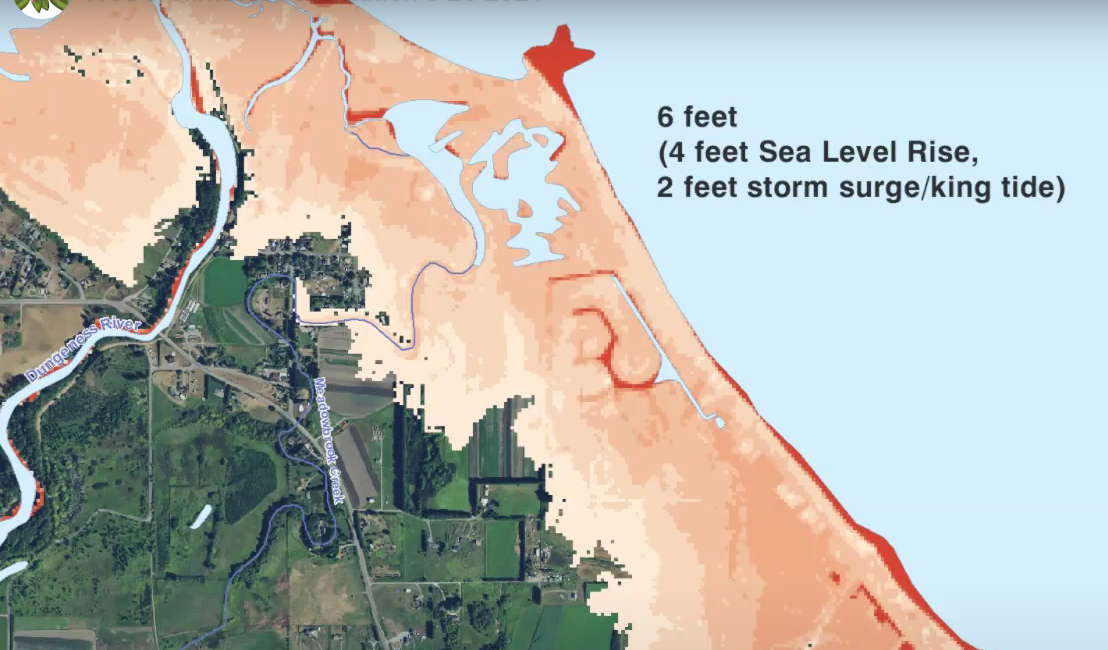 According to the Climate Impacts Group, by 2100 under the High (RCP 8.5) greenhouse gas scenario, there is a 2% chance the amount of relative sea level rise will meet or exceed 4′ by 2100 at this location; storm surge and kind tides may add another 2′ of inundation under this scenario.

To watch a presentation of the study’s results with key maps click here. To view maps only, click here.

Effects from a warming and changing climate are already having an impact on our region, and are projected to intensify. Additional stresses from longer, drier summers and warmer, wetter winters will bring broad, compounding threats to the forests, farms, and wildlife habitat we are working to conserve and steward for future generations.

Stewarded for millennia by its indigenous people, the Olympic Peninsula has long been recognized as a place of extraordinary natural beauty and abundant natural resources deserving of conservation. This resulted in the establishment (in 1897) of the Olympic National Park and associated wilderness designations. Well over a million acres of public land managed as wilderness encompasses the center, and the outer coast, of the peninsula, functioning as an ecological reserve that retains much of its ancient ecological heritage. The clean water that runs from the mountain slopes still supports viable populations of salmon, recharges the aquifers, and supports the surrounding population of approximately 115,000 people in Jefferson and Clallam counties, and the Olympic Peninsula’s Sovereign Tribal Nations.

While there is much federally protected land on the Olympic Peninsula, there is still an opportunity to protect and enhance:

While much good work has been accomplished in this area to permanently protect lands that have significant conservation values, those areas that have the most resiliency and mitigation values have not yet been identified. As responsible stewards of the land in our care and proactive advocates for land needing protection, it is essential to understand how climate-related impacts such as changing rain and snow patterns, stronger storms, changes in animal migration and life cycles, higher temperatures, more droughts and wildfires, less snow and ice, changes in plant life cycles, and warmer marine waters will affect different areas of the Olympic Peninsula.

In 2020, with support from the Land Trust Alliance, Sustainable Path Foundation, and generous community donors, Jefferson Land Trust and North Olympic Land Trust conducted a Land Resiliency Study — a comprehensive update to our spatial conservation planning, with a focus on climate resiliency across virtually all of the Olympic Peninsula.

We worked with an expert GIS contractor, Core GIS , and used The Nature Conservancy’s Conserving Nature’s Stage data, along with other available spatial planning data to look deeply at the conservation values of our land-base to identify the places and features that will most likely retain their conservation values in a warming and changing climate.

Our goal is to use the results of this analysis to influence our land conservation project selection priorities, which will result in more resilient lands being protected in our region across all four pillars of our conservation work: Habitat and Biodiversity, Working Forests, Working Farmland, and Community.

In the true sense of the word “conservation,” this Land Resiliency Study is focused on the identification of those places that have the highest likelihood of retaining conservation value in perpetuity.

Considering climate predictions for the region 30, 50, or even 100 years from now, some of the questions we tried to answer with the study are outlined below.

Using over 90 data sets drawn from 18 public and private sources, our Land Resiliency Study determined that:

How We Will Use the Data and Work Together:

We intend to continue to work together to identify cross-county projects on which to work collaboratively, and opportunities to share the study’s findings throughout our communities.

However, given the scale of the challenges we face, it is clear that more must be done to identify the most resilient, and threatened, lands in our area, and this planning effort helps us take a big step forward as a stakeholder in this shared strategy.

In 2018, Washington Sea Grant and the University of Washington’s Climate Impacts Group also published a report that included sea-level rise projections for sites all along the Washington coastline, including Clallam and Jefferson counties. Our spatial analysis builds upon that prior planning work and numerous other efforts.