“When it comes to transferring a farm to the next generation, success is temporary, but failure is permanent,” says Ryan McCarthey of Dungeness Creamery. Their ongoing success is the result of a creative shift in their business model, a cash infusion from selling the property’s development rights, training, and a little bit of fate. 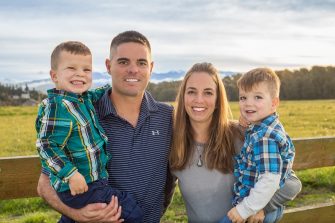 When Jeff and Debbie Brown started their farm in Sequim, Wash., there were close to 60 dairies on the Olympic Peninsula. By the time their daughter Sarah was in high school, only six were left. Today, Sarah and Ryan run one of the two remaining dairies on the Peninsula.

Still, Sarah wanted to get involved with the family business, to be home. She got a degree in animal science at Washington State University and found a ready partner in Ryan, “I seriously found a guy that was willing to farm with me?!” But the family was aware that the current condition of the farm wasn’t financially sustainable.

The dairy’s transfer began with improvements to profitability. After research and consultation with WSU Extension and the county’s Economic Development Council, the Browns decided to shift to a raw milk dairy They cut the cow numbers by over half to begin bottling and selling raw milk under the name ‘Dungeness Valley Creamery.’ Sarah says, “the farm successfully transitioned to a niche market with higher margins, so our farm was ripe and ready for the transition to the next generation. Everything fell into place.”

From there, farmland conservation easement funds provided the catalyst to the Brown’s retirement. North Olympic Land Trust (called Friends of the Fields at the time) reached out to the Browns with grant funds to purchase the farm’s development rights and preserve the farm for agriculture. Jeff says this infusion of cash, “was a blessing that came out of nowhere, and it opened the door to retiring early.”…CLICK HERE to read full article.