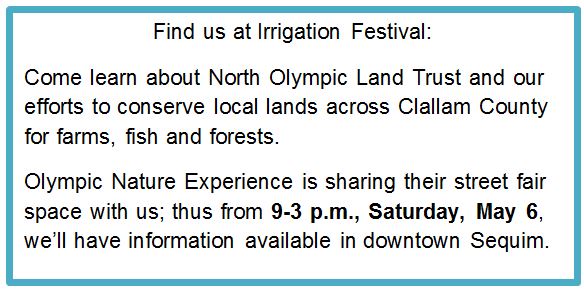 Widely known for its sunshine and relatively little rain, Sequim and the surrounding Dungeness Valley that emerges from the foothills of the Olympic Mountains and follows the Dungeness River to the Strait of Juan de Fuca, contain some of the most fertile soils on the North Olympic Peninsula.

“We’re so lucky here in Clallam County with great resources,” Clea Rome, Washington State University Clallam County Extension director, said. “Soil and water are a farmer’s greatest resource and there is a large proportion of *prime farmland in our county.”

Despite the area’s nutrient-rich soils and mild climate, it wasn’t until 122 years ago when the first headgate on the Dungeness River was opened, allowing for irrigation did farming (aside from dairies) begin to flourish. Today the Sequim-Dungeness Valley supports a variety of commercial crops, including but not limited to, hay, vegetable row crops, berries and seed crops, such as kale and broccoli.

The importance of irrigation is highlighted once a year at the onset of May by the Sequim Irrigation Festival – the longest running festival in Washington, dating back to 1895. Per tradition, from May 5-14, 2017, the streets of downtown Sequim will be filled with music, fairs, parades and public performances – all reflecting the opportunity and quality of life provided by the ability to irrigate the land. 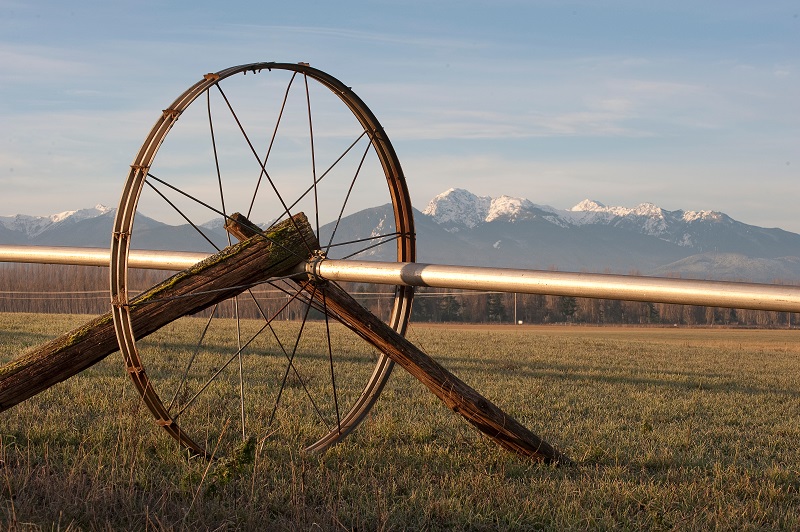 “If we didn’t have an irrigation system in this valley, it wouldn’t be able to support agriculture and this would be a very different place,” Joe Holtrop, Clallam Conservation District executive director, said.

Throughout the decades irrigation techniques have evolved, and as local weather patterns continue to shift, coupled with the increasing demand for water, water management has grown in importance. Since the late 1890s irrigation within the area has moved from flood irrigation, which changed the hydrology of the valley, to sprinklers. Instead of open ditches, there’s been an ongoing effort to pipe most of the ditches for increased water efficiency and conservation.

Additionally, there’s a growing interest in storm water management and reclaimed water, as well as the implementation of a variety of aquifer recharge projects surrounding the Dungeness River. Methods to recharge the area’s multi-level aquifer is expected to ensure ample river flows in late summer even after the snowmelt is no longer feeding the river and when farmers rely most heavily on irrigation while salmon seek to return home.

Most recently, an array of community partners and shared water users are exploring the possibility of an off-channel reservoir. Given the shared social and environmental reliance on the Dungeness River and now increasingly inconsistent snowpack (which once acted as the watershed’s natural reservoir), new ways of safeguarding sustainable water use, including irrigation continue to be a critical part of life on the North Olympic Peninsula.

Click here to watch a video and learn more about the proposed off-channel reservoir.

* “Prime farmland” as defined by the United States Department of Agriculture is “land that has the best combination of physical and chemical characteristics for producing food, feed, forage, fiber, and oil seed crops and is available for these uses.”