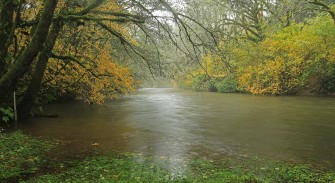 Fall along the Pysht River

November 12th, 2015 – Tom Leonidas, the latest landowner to donate property to the North Olympic Land Trust never set out to own land on the Olympic Peninsula. And yet, the Bellevue resident found himself the unlikely owner of a prime piece of property on the west-end running adjacent to the Pysht River approximately 10 miles south of Clallam Bay, WA

His road to ownership of this property is one mired in tragedy.

Life forever changed for Leonidas on May 30, 2012 when his wife Gloria, age 52 , had her life taken at Seattle’s Town Hall parking lot as part of the Cafe Racer shooting spree, that in the end left 5 dead and the shooter taking his own life.  Left with their two teenage daughters of 12 and 17, Tom knew that his priority focus needed to be on keeping his daughters’ lives moving forward; and that it was what Gloria would want.

“There was no rational answer for what occurred.  Even though you know you must move forward, you still want answers and more importantly justice.  Gloria was such a strong woman and she instilled this strength and sense of justice in those around her”, states Leonidas.

Leonidas set forth to pursue answers and seek justice.  “All I wanted was a legal judgment against the man that took Gloria from us and to bring closure for our family”, states Leonidas.  He was awarded the Pysht property as settlement in  a lawsuit.

Leonidas wanted to find a way to use the property to create something positive out of a horrible tragedy, so he reached out to North Olympic Land Trust to see if they would be interested in the property to conserve it.  “Gloria loved the beauty of nature and she was passionate about preserving the environment.  I was pleased to discover that the property run adjacent to a 58 acre conservation area already owned by the Land Trust.  It was as if it was meant to be”, states Leonidas.

“Adding the property to the Land Trust will allow us to continue to pursue our goal to offer recreation, provide public access and build salmon habitat along the Pysht River.  It is deeply touching that he chose to see this as an opportunity to leave a legacy to his wife’s love of nature and we hope this creates some solace for his family”, states North Olympic Land Trust Director Tom Sanford.

North Olympic Land Trust is dedicated to the conservation of open spaces, local food, local resources, healthy watersheds, and recreational opportunities and as such has permanently protected over 3,200 acres of land on the Peninsula including 750 acres of land they own.

“Our conservation approach is effective because it is collaborative, voluntary, and ethically based” states Sanford.

Tom Leonidas is among more than 90 landowners who have chosen to work with North Olympic Land Trust to permanently conserve the aesthetic of their land.

“I understand it is a beautiful piece of property.  It is fitting to give it to the Land Trust to bring something positive out of this tragedy. It will allow current and future generations to enjoy this land, and it will play a vital role in preserving the habitat along the Pysht River”, states Leonidas.

“This is the way Gloria would want it.  It is in good hands and our family is so pleased it fits with North Olympic Land Trust’s strategic vision for the Pysht River.  It is the most positive way to bring closure for us, knowing that it has played such a meaningful role for our environment”, continues Leonidas.