The North Olympic Salmon Coalition says a project to restore habitat and improve ecological functions in the 3 Crabs Road area is on schedule for a November completion. 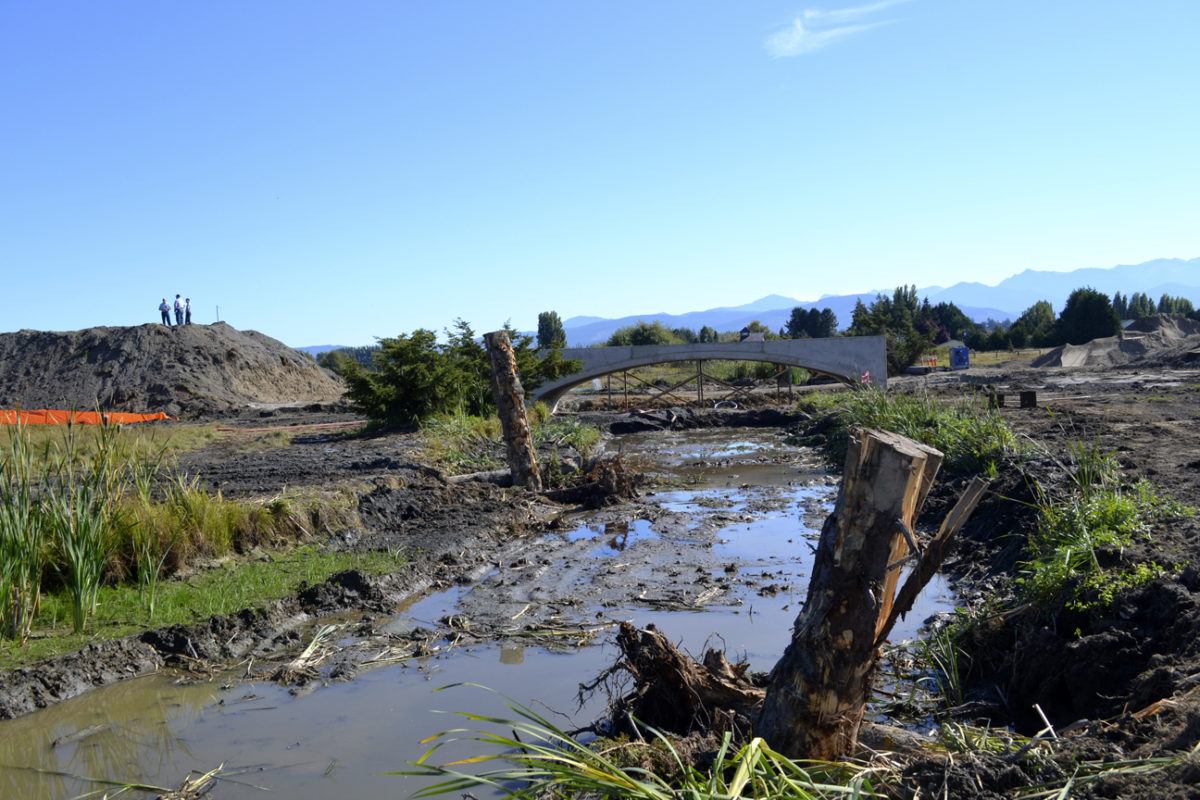 Staff with the North Olympic Salmon Coalition anticipate The 3 Crabs Nearshore and Estuarine Restoration Project to be complete by November, which includes a new bridge over Meadowbrook Creek.

An effort to restore habitat and improve ecological functions in the 3 Crabs Road area tentatively is set for completion by November.

Staff with the North Olympic Salmon Coalition, the nonprofit spearheading The 3 Crabs Nearshore and Estuarine Restoration Project, say the new Meadowbrook Creek bridge and several other components will be completed sometime in November as part of a rerouting plan for 3 Crabs Road and Sequim-Dungeness Way.

The rerouted roads are part of an approximate $3 million project from state and federal funds to revert the area back to a more natural state improving the ecological function of more than 40 acres of coastal wetlands and restoring a half-mile of stream channel.

Kevin Long, project manager for the coalition, said the existing Meadowbrook Creek Bridge will be removed at the end of the project in favor of a new concrete bridge with a 61-foot opening compared to the current bridge’s 19-foot opening.

Long said crews with Interwest Construction Inc. of Burlington and Sequim are “pretty determined to get it done before [winter].”

The mountain of dirt, surcharge, next to the roadway is stacked high, he said, to weigh down the road surface so that it doesn’t sink later on.

The current bridge’s opening is prone to trapping large debris and leading to flooding upstream but the new roadway’s crest elevation is about one foot higher than the existing roadway, staff said.

The new portion of Sequim-Dungeness Way will have a 6-foot shoulder compared to its previous 3-foot shoulder, too.

Planning overview documents state that construction reshapes about 1,100 feet of the Meadowbrook Creek channel to the adjacent sloughs and removes about 800 feet of dike and 80 feet of rip rap along the creek’s banks.

Coalition staff said the ecological impact of the project should improve three types of habitat — beach, salt marsh and the lower portion of Meadowbrook Creek.

Long said beforehand the creek was trying to take three routes but rerouting the creek brings it back to its 1914 alignment and its highest effectiveness.

An archaeologist visited the site and while no historical artifacts were found, Long said they discovered and removed about 300 tons of contaminated soil from an old pole barn.

“The structure was long gone but the contaminated soil was still there,” he said.

Long said cost increases such as removing the creosote range between $250,000 and $300,000 but he felt they were necessary changes as.

Construction on the nearshore and estuarine project began in June and Long said access to the Washington Department of Fish and Wildlife Viewing Area and 3 Crabs Road residences hasn’t been affected.

He said they’ve actually seen an increase in bird activity because of the changes they’ve made to the waterways.

Part of the project includes a new trail to the viewing area on the beach from a cul-de-sac that includes 400 feet of parking on an 8-foot paved shoulder leading up to it on the south side for parking.

The wildlife area is a popular spot to see birds and Helen’s Pond still will be accessible for a safe pull-off with a 4-foot paved and 2-foot gravel shoulder area. Three new lagoons also will be created through the project and can be viewed from the shoulder along with other existing popular spots.

Existing infrastructure such as private property signage and a portable toilet will remain on site, and utilities along Sequim-Dungeness Way eventually will be rerouted and buried, going along the new path, Long said.

Other elements of the project include removing 950 feet of shoreline and streambank armoring near the existing bridge, removing 800 feet of tidal dike to restore connection to estuarine habitat, removing shoreline armoring and a dike.

For more information about the project, visit http://nosc.org/restoration/current- projects/