“If you can only visit two continents in your life, then visit Africa twice,” Ken Campbell said while browsing through a select few photos from thousands taken during a recent trip there.

Ken and his wife Mary are Port Angeles residents, but when they’re not exploring their own backyard on the Olympic Peninsula, they’re in far off places photographing wildlife. Ken and Mary both have a passion and talent for photography, which coupled with their shared interest and appreciation for nature and wild places, have inspired them to travel – mostly to different wildlife preserves and conserved areas.

Quoting St. Augustine, Ken said, “The world is like a book and those who do not travel read only one page.”

Not all can travel abroad, but making travel and discovery a priority, even to new places within your surrounding area, can be mind expanding, which is something the Campbell’s hope to impart with others by sharing their experiences and photographs.

Reflective of their interest in wildlife, habitat protection and responsible land use, the Campbells are longtime supporters of North Olympic Land Trust and regularly volunteer their skills and time. There are conservation organizations worldwide like North Olympic Land Trust. On the Campbell’s most recent trip to Africa they visited the Lewa Wildlife Conservancy in northern Kenya. 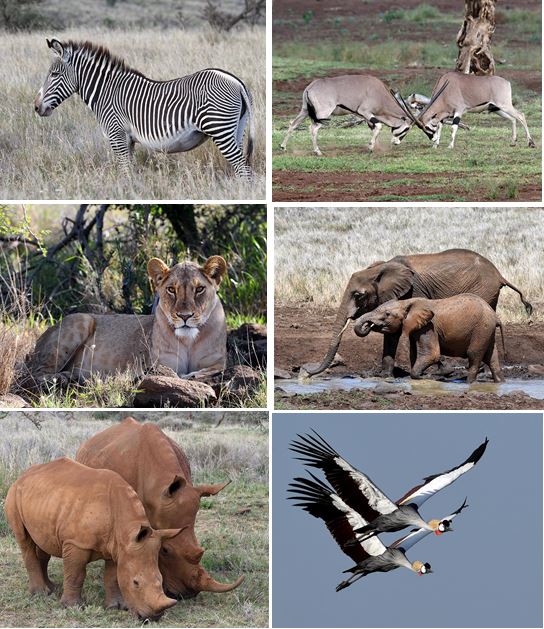 Above are a select few of the 50-plus species the Campbells observed and photographed while visiting the Lewa Wildlife Conservancy. From left to right, top to bottom: Grevy’s Zebra, Fringe-eared Oryx males fighting, African lioness, African elephants drinking at waterhole, mother and young white rhinoceros, and Grey Crowned Cranes.

Lewa is actively involved in promoting conservation both within its boundaries and in the ecologically important community-owned areas to its north. The Conservancy is the founding member of the Northern Rangelands Trust, an innovative partnership that offers support to communities who have set land aside for wildlife conservation and development in northern Kenya.

Growing from a relatively small fenced rhino sanctuary within a large cattle ranch in 1983, Lewa now encompasses the entire ranch and its 62,000 acres. Located near Mount Kenya, the area is rich with species, including some unique to only that part of Africa, explained Ken and Mary.

Although this was the Campbell’s first visit to Lewa, it was their seventh trip to Africa since their first adventure there in 1990.

Lewa made the Campbell’s travel wish list because of the unparalleled array of species it is home to, including about 12 percent of Kenya’s black rhino population. The dramatic decline of black rhinos was what first inspired the Campbells to visit Africa 27 years ago.

“At that time, people thought black rhinos were going extinct,” Ken said. “Poaching was the main reason behind the rhino’s decline.”

Like the gorilla, or the wolves at Yellowstone, serious efforts to save black rhinos from extinction didn’t begin until people realized rhinos have a greater value alive than dead did, Ken explained. The value of threatened species and overall biodiversity is becoming more recognized with the growing interest in ecotourism.

What used to be Africa’s “big 5” for hunting is now becoming recognized as the “big 5” for ecotourists to see and/or photograph, Ken said. These species include the cape buffalo, lion, leopard, elephant and black rhinoceros. 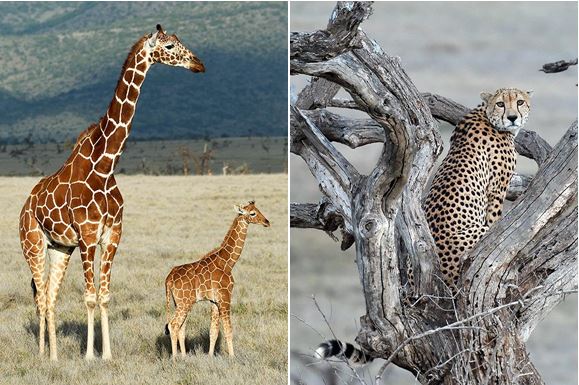 Additional photos by the Campbells at the Lewa Wildlife Conservancy. From left, Reticulated Giraffe with calf, and African cheetah.

As ecotourism is growing in popularity so is the interest in land/habitat conservation. Still, finding balance with land use is a universal challenge. On the North Olympic Peninsula, conserving river corridors essential to historic salmon runs or saving farmland from development can be challenging. In northern Africa, the large population, poverty and dry climate only add to the pressure on land and challenges with prioritizing habitat and wildlife conservation.

Despite the many challenges, Lewa is working to achieve balance through integrated conservation management methods, investing in the surrounding communities by contributing to more than 30 schools, and adding to the local economy via ecotourism.

“It’s an example of the power of what one ranch can do,” Ken said.

Want to experience wildlife conservation in action elsewhere? You can join Ken and Mary on their next big adventure.

“The trip will take us to the Pantanal Conservation Complex, a UNESCO world heritage site and biosphere reserve of spectacular beauty. The Pantanal is considered one of the best wildlife destinations in South America. We will search for South America’s “Big Five” – Jaguar, Giant Anteater, Giant Otter, Ocelot, and South American Tapir. Our trip takes us to places to view a wide variety of birds, including the Jabiru Stork standing five feet tall, the Hyacinth Macaw, the world´s largest parrot and the colorful Toco Toucan, as well as diverse wildlife, including Capybara, Black-striped Tufted Capuchin Monkeys, Armadillos and much more. We will travel to both the north and south Pantanal regions where marshes, lakes, and streams provide diverse ecosystems that foster superb wildlife encounters. On our trip in 2016 we saw 226 species of birds and 26 species of mammals. Travel in the Pantanal is via boat, bus, and safari vehicles.”

Trip is limited to 10 people.

If you are interested in joining other Olympic Peninsula wildlife enthusiasts and conservationists on this trip, contact Ken and Mary at 360-477-4011 for more information.

Above are a few photos taken by the Campbells during their last trip to Pantanal Brazil. From left, Blue-and-Yellow Macaws, Jaguar, Hooded Capuchin Monkey, and a Giant River Otter with a fish in the Cuiaba River.