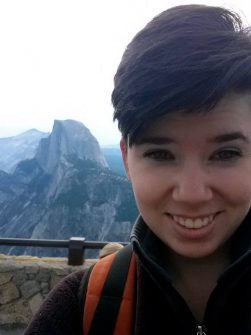 Leaving behind California’s towering redwoods for the Olympic Peninsula’s own iconic evergreen forests, Navarra Carr is excited to explore a new landscape – something she has enjoyed doing since childhood.

“My mom is a botanist and worked for the state parks, so growing up we spent most of our summers outside,” Carr said. “Every family vacation was spent outdoors camping and backpacking, which are things I’m really looking forward to doing here.”

In mid-July, Carr moved to the Olympic Peninsula to accept a uniquely shared Administrative and Finance Assistant position with Jefferson Land Trust and North Olympic Land Trust. Carr is now one of two employees shared by the land trusts. Although Jefferson Land Trust works within Jefferson County and North Olympic Land Trust focuses its efforts in Clallam County, both community nonprofits have a common goal of conserving the Olympic Peninsula’s wild and working lands for today and future generations. In the spirit of collaboration and in support one another’s efforts, the organizations continue to find innovative ways to partner, such as sharing staff.

Carr will act as Jefferson Land Trust’s Finance Assistant and as the Administrative Assistant for North Olympic Land Trust. Wearing multiple hats is nothing new to Carr, who is looking forward to the opportunity to work on behalf of both organizations.

“I’m all about partnerships and working collaboratively so this seems like such a wonderful model,” she said. “I think it’s going to be a really fun challenge.”

After graduating in 2014 from Sacramento State University with her bachelor’s degree in Philosophy with an emphasis in ethics, Carr joined AmeriCorps. Her time with AmeriCorps led her to a position with the nonprofit Arcata House Partnership aimed at providing homeless services. While there, Carr launched and developed the position of office manager and aided in the organization’s successful growth from a staff of six to 20.

“I was doing a lot the behind the scenes work from grant management and development to communicating with community partners. I got do a little bit of everything and wear many hats,” she said.

After nearly three years with Arcata House Partnership in her hometown of Humboldt County, Carr’s interest in shifting away from homeless services grew. Ready to move somewhere new and apply her diverse skillset in finance and administration toward a different sector, Carr was drawn to land conservation.

“It just felt like working with the land in some capacity was going to be a good fit,” she said.

With her innate appreciation for the outdoors and her wealth of skills, the boards and staff at both North Olympic and Jefferson land trusts are thrilled to welcome Carr to their teams.

About the land trust:

Jefferson Land Trust – Jefferson Land Trust is a nonprofit, community-driven conservation organization in Jefferson County. From protecting habitat for wildlife to facilitating the generational transfer of land, we work with landowners, government agencies, the timber industry, the Navy and community groups on a range of projects. Together we’ve preserved a greenbelt of wetlands, protected salmon habitat, and promoted sustainable local agriculture. Learn more at https://saveland.org/.