Together, an interest in science, a love for being outdoors and the intrigue of a growing organic movement, led Scott Chichester to pursue a career in agriculture.

After graduating from Sequim High School in 1992, the longtime local followed his interest in science at Peninsula College before finding himself at one of the largest organic farms in western Washington – Nash’s Organic Produce.

“I get great joy out of the physical manifestation of the work that I do,” Chichester said. “I also get an extra layer of reward knowing that I’m growing healthy food for people.” 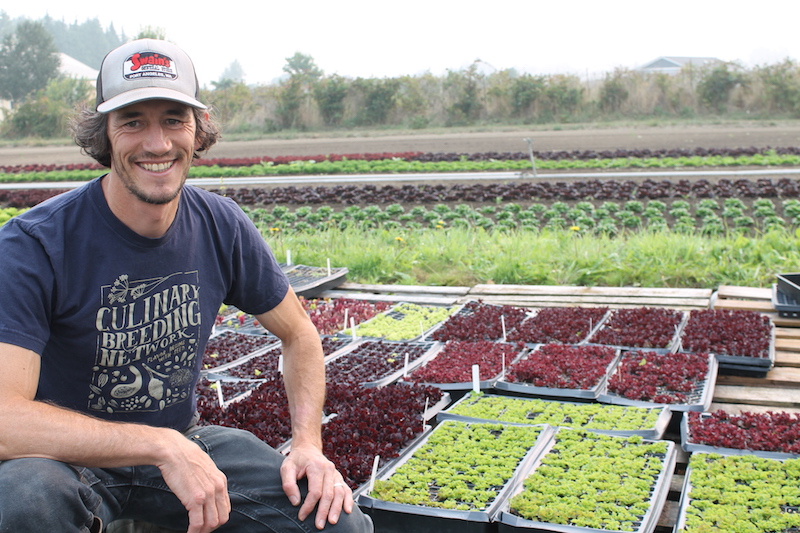 In 2015 Chichester took his experience and passion for growing food and started his own operation known as Chi’s Farm. Since branching out on his own, the team at North Olympic Land Trust has followed Chichester’s journey as an up-and-coming farmer in the area.

“Whether making communal pizza at his farm or teaching ag classes at Sequim High School, Scott’s dedication to both building community and the viability of local agriculture is notable,” said Tom Sanford, Land Trust executive director.

Farmer of the Year

Every year, a handful of community members nominate the Farmer of the Year — an award honoring individuals and/or organizations that have positively and significantly impacted the local farm community. This year, the committee selected Chichester, who will be honored during the Land Trust’s 19th Annual Friends of the Fields Harvest Dinner on September 16.

Last year’s award went to WSU Clallam County Extension. Others include but aren’t limited to farmers such as Doug Hendrickson and Lee Norton, Nash Huber, Tom and Holly Clark, and Steve Johnson, as well as individuals such as Bob Caldwell and such organizations as the Clallam Conservation District.

Recognition as the 2018 Farmer of the Year is adding to an already exciting time for Chichester.

“This is a pivotal time for me,” he said.

After four years of balancing his time between his farm and teaching Ag Science and Ag Biology at Sequim High School, Chichester is turning his full attention to Chi’s Farm where he mostly grows an array of mixed salad greens and some vegetables. As he transitions solely to farming, he’s looking at ways to not only grow Chi’s Farm, but community too.

“As I grow the business, I don’t just look toward growing it in a way that I can fill a market somewhere else,” he said, noting that less than one percent of United State’s population is engaged in agriculture.

“Most people either have no idea what it means to be on a farm and to produce food, but around here there’s still open space and opportunity to engage with agriculture so my goal is really to bring people to the farm, have a good time, eat some food together, let kids run around and let the adults see the importance of local agriculture,” Chichester said.

Among the many ways Chichester is looking to expand Chi’s Farm, including but limited to increasing the acreage, connecting with new markets and growing the CSA program, he plans to continue to regularly host community pizza parties on the farm.

“It is an important part of the identity of the farm,” he said. “It is part of that larger goal to connect people to agriculture and therefore maintain access to land, which provides a sense of openness and a quality of life that you otherwise tend to lose.”

Along with farmers’ efforts, overall community support is an important part to the success of small producers, Chichester explained.

“Finding ways to buy direct from a producer is the single best way that people can have a real impact and support local agriculture,” he said.

Produce grown at Chi’s Farm is available at the produce stand located at 142 Towne Road in Sequim. It can also be found at a variety of local restaurants and grocers or purchased directly via the farm’s CSA (Community Supported Agriculture) program. Learn more about Chi’s Farm, at www.chisfarm.com.