Triphosa of the Tunnels
by Robert Michael Pyle

We have some beautiful big moths, such as the Polyphemus and Ceanothus Silk Moths, but this one is neither large nor colorful.

Called Triphosa haesitata (the Tissue Moth), it is about an inch-and-a-half across, with lovely, wavy-brown, highly striated wings. These vary greatly, from cream to buff to russet to umber, rendering them cryptic against bark, rock, and many other backgrounds. Tissue moths hibernate in caves or cool buildings. One Christmas, I discovered that the battery tunnels of Fort Worden State Park, Port Townsend, serve them admirably. Anyone intrepid enough to explore these pitch black tunnels (with a good light!) may be astonished by the vision of thousands of these handsome creatures plastering the old concrete walls, their eyes shining like a million tiny gold nuggets—the greatest aggregation of butterfly-like insects I have ever seen outside the monarchs of Mexico and California. 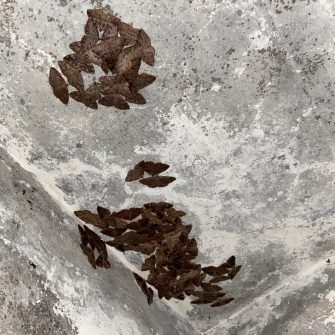 Used with permission from the author. Originally published in G’Num (Vol. 17, No. 1) the newsletter of the Washington Butterfly Association