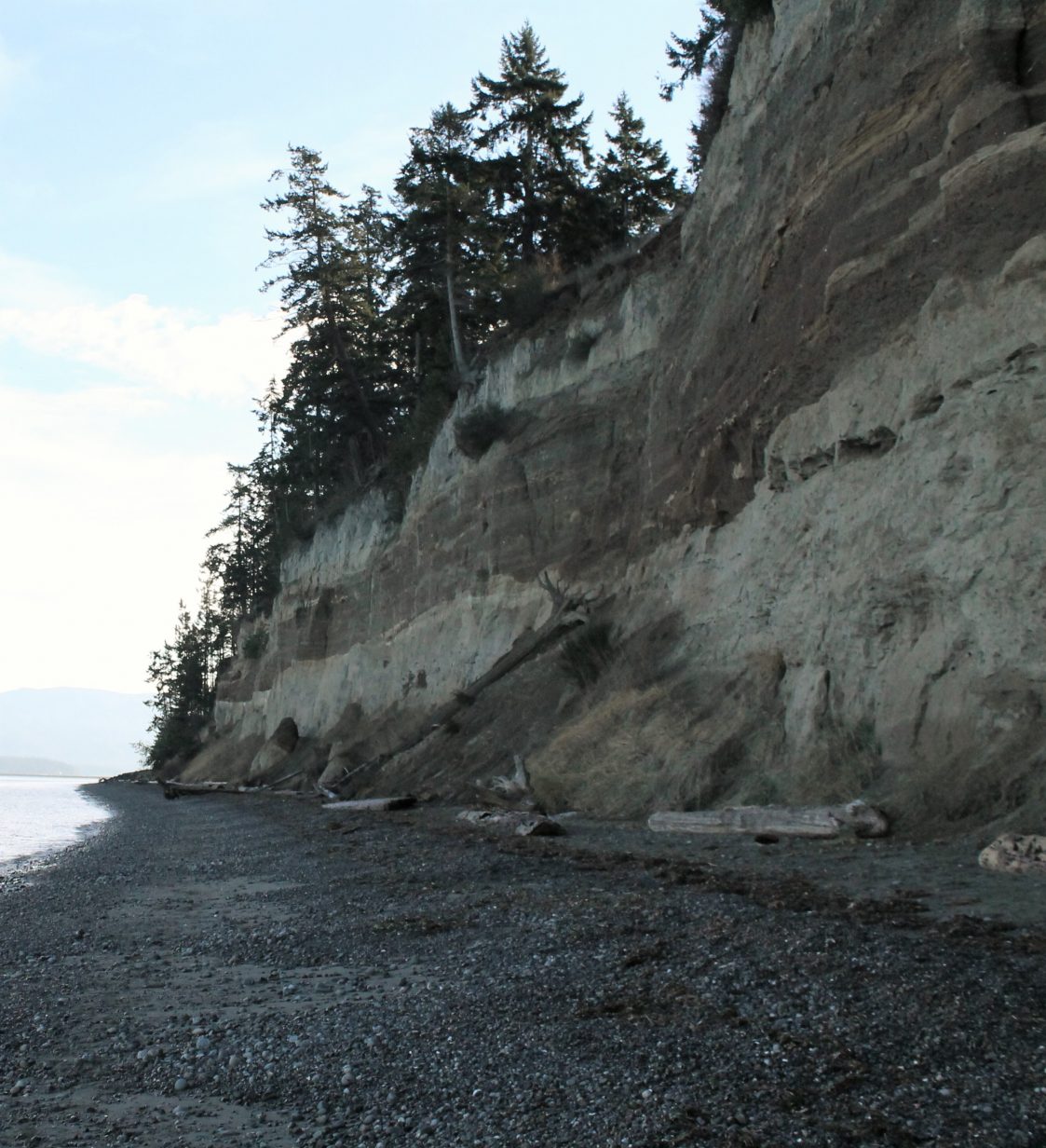 About 1/3 mile of shoreline on the beautiful North Olympic Peninsula is better protected as of late December 2016.

By working with North Olympic Land Trust, local landowners recently increased protective measures along a portion of the Dungeness Drift Cell – the foundation of the treasured Dungeness Spit.

The Dungeness Spit is loved by many, including those that not only live within the area, but visitors as well. The 5-mile Spit is admired for its length, the recreational opportunities it creates, as well has the diversity of wildlife habitat it supports, including Dungeness Bay.

Located within the Strait of Juan de Fuca, Dungeness Spit is built by sediment from nearby creeks and a series of eroding bluffs. Sediment from these sources, known collectively as the Dungeness Drift Cell, is transported by waves, tidal currents and wind.

“The great majority of the Spit’s sediment comes from bluff erosion. The complex of high bluffs stands generally 100 to 240 feet in height and extends west of the Spit for 10.4 miles,” according to the Dungeness Drift Cell: Land Parcel Prioritization and Conservation Strategy prepared in 2016 by the Jamestown S’Klallam Tribe in partnership with the North Olympic Land Trust. “The bluffs erode at various rates – on average one foot per year – and deliver an enormous quantity of sediment to the beach.”

Given the ecosystem services of eroding bluffs, North Olympic Land Trust was eager to work with the local landowners to conserve an additional 10.7 acres and enhance protection of the associated shoreline. The new conservation easement, along with the landowner’s existing conserved properties equate to a total of 116 conserved acres.

Beyond shoreline protection, the newly added conservation easement comprises about 3 acres of wetland. According to Washington Department of Fish and Wildlife (WDFW) Priority Habitat Species data, a variety of species have been observed on the 10-plus acres, which is within the management buffer of the Northern Spotted Owl. Additionally, in its marine environment, surf smelt breeding occurs, and both Pinto Abalone and Red sea urchins have been observed.

The property is also noted as being home to the Western Toad, which is a “species of concern in Washington,” according to the Washington Department of Fish and Wildlife.

“This species (Western Toad) breeds in wetlands, and there are anecdotal reports that this species will return to their breeding areas every year,” said Michele Canale, North Olympic Land Trust Conservation Director. “Alteration of these sites may lead to population declines and population extirpation.”

Now conserved however, the identified wetlands will be protected in perpetuity.

Restricted shoreline armoring and increased wetland and bluff buffers, coupled with limited and well-planned development is just one example of how strategic conservation can be done to balance both the human and environmental use in a sensitive landscape.